There are over 30 heroes in El Chronicle to choose from. Each hero has a unique set of skills and abilities and uses.

What heroes are great? What heroes should I work on? I don’t think we know yet. Many high level players will say whoever you focus on is who will be great. And it’s really hard to max out a hero so there’s always room to improve someone.

Dean is your starting hero. He’s a great tank, has a high damage output for a tank, and his hero pieces are plentiful, so it’s easy to upgrade him. This is a great one to use early on all the way through the game.

LeeJiyeon is one of the most used heroes. That is because she’s an exceptional healer, doing huge AoE heals. Not to mention she’s good at staying alive and can produce a recognizable amount of damage.

Yeonhwa and Aaren are two support heroes. They can significantly buff your team and debuff enemies. A lot of high level players put one or the other in their squad to help keep your squishy assassins alive and help the battle as a support hero. See a comparison of the two at the bottom of that page.

Hero pieces don’t drop at the same rate for all heroes. Some heroes get an abundant amount of hero pieces just by adventuring naturally, while other heroes have no pieces drop and you have to seek alternative ways to find them. Heros that have a low drop rate on hero pieces are harder to evolve. If you consider that you need about 2,000 hero pieces to max one to 6 stars then another 1500 pieces to awaken them, that’s a lot of pieces. And if you have a hard time finding those pieces that hero will progress slower than others.

Low/no drop rate hero pieces (these heroes will only find pieces by doing unique hero quests, side story, buy from the shop, or daily mission):

The rest of the heroes have a medium drop rate.

The other thing to keep in mind when picking a squad is that you want to save up your gems to do a 10x summon from the summon shop. This is where you will be potentially getting T6 items for your squad. But you can only choose 1 hero from each category to summon equipment for. So if your squad is made of 4 assassins let’s say, you will have a hard time getting equipment for all of them, since you can only pick 1 assassin at a time to do the summon shop on.

Also keep in mind each hero from a class will be competing for evolution materials for other heroes in that class too. So for instance you need 90 crests to awaken a hero which takes a long time to get. Awakening 2 heroes of that same category will require twice as many crests. So this means focusing on 1 hero from a class will allow you to advance that hero much faster vs trying to get 2 heroes from that class advanced.

Pick a hero you think is cool. They look cool, have cool moves, whatever. Because once you find someone you like, you can then form a squad to make them work. Look at the squad builder to help decide how to balance a squad.

To give a hero an early to mid game advantage, craft the hero weapon for them. This is the weapon that goes in the bottom left slot. For about 100 hero pieces, 500k gold, and 90k raid points you can make one. Or you can get lucky and summon one from the summon shop. This weapon gives the hero a new skill as well as a whole bunch of great stats. You’ll see significant improvement when you get one.

Your best hero is the hero with the best equipment, highest level, and most upgraded/evolved/awoken. And just when players start reaching the highest levels the game devs increase the caps. So there’s alway room to improve the heroes.

It’s a significant investment to get a hero all the way to awakened 1. So play around with a bunch at 4 or 5 star to see how they fair and if you like them enough to invest in them.

You can browse the top combat rated heroes in the game by going to Hero > Hero Book > Rank. From here you can sometimes click on the little “i” button in the bottom left to see their equipment, skills, and stats. This is fun to snoop on top players to see how they set up their character. It’s also a handy way to look at heroes you don’t have to see their skills.

At first your squad will consist of 3 people. So pick a tank, someone who can heal, and a damage dealer.

Later on your squad will consist of 5 people. Again it’s crucial to have a tank, healer, and damage dealer, but the other 2 members is really up to you. Pick 2 more damage dealers for a quick fight. Pick a secondary tank to off tank some of the additional enemies, pick a support person, doesn’t matter. Find someone cool and throw them in.

You might wonder “Do I need more than 5 heroes?” Ya you do. Here’s some reasons.

So you might as well go nuts and recruit every hero from the Inn when you get a chance. Don’t worry about bad heroes interrupting your adventures. First I’ve noticed that the top heroes join in on those interrupts, not level 1s. Second, there’s more benefits to having a bunch of heroes.

Try playing with the squad builder.

There are 4 types of heroes. Warrior, Assassins, Supporter, and Specialist. Warriors are tanks, they are who you want to get hit during battle as they should have a lot of HP and def. Assassins are going to do the most damage, taking down targets quickly. And Supporters and Specialists are a mix. They might be healers, buffers, offensive tanks, or some mix of that.

Tanks also generate a high amount of aggro keeping the enemies on them and not on assassins or healers. 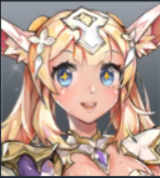 It’s not clear who the best tanks are. Each are built pretty well. So find one you think looks cool has fun skills and is exciting to play. I personally like sticking with Dean since his hero pieces are more available in the game than other tanks.

There are two types of assassins, ranged and melee.

I think Ranged dealers have a slight advantage. They stay out of combat range which keeps them alive longer. They can switch targets quickly without having to run over to the new target. And they can continue to deal damage when the enemy is doing some kind of AOE attack and the melee units have to run away for a second. However I have also seen solid melee dealers completely out damage a ranged dealer. For the most part a melee dealer will stay out of any AOE damage, and not take aggro from a tank.

The offensive supporter heros will be good damage dealers and maybe even buff the team to improve damage even more.

The defensive supporters often will heal or have defensive buffs for the party such as increased defense or hp.

Who to Focus On

When deciding who to upgrade or give that nice equipment to here is a general guide. First upgrade your tank. They really do keep the team alive and if they fall the whole team falls. But if your DPS falls you can still make it through many missions. The main tank should be the buffest one in your squad and consider crafting a hero specific weapon for them.

Before you can Evolve a hero you have to upgrade them to the max. To upgrade a hero you need hero pieces. These can be acquired through adventuring, achievements, side quests, or bought in a shop.

Under your hero, click upgrade. If you have enough pieces and gold you can upgrade them. Each +1 they are upgraded their base stats rise and they become buffer.

Once you collect hero pieces you can use them to upgrade your hero. Estimates on how much upgrades will cost below.

Hero pieces are also used in upgrading skills after level 40, crafting armor, and awakening a hero.

A hero starts at 1 star and can evolve to 6 stars. It is expensive to evolve a hero so look at what items are needed and think about farming those items and saving them up.

When a hero is evolved to the next star they gain in base stats. They also unlock new things.

Vines and Tearblooms are easily farmable from many of the adventure missions. The other ingredients are farmable in later missions but only will allow you to do it a few times a day. You may also get ingredients from the challenge missions. Stock up on all ingredients because upgrading is really expensive.

After a hero reaches 6 stars they can be awakened. There are 3 stages to awakening W1, W2, and W3. This is extremely expensive to accomplish and will take quite a while. But awakened heroes will gain more in base stats, be allowed to level higher (up to 80), and open more abilities.

To awaken a hero to W1 you need you need first to have 6 star +8 hero. Then 1500 hero pieces, 90 low grade crests for their class, and 2,000,000 gold. This will unlock the temple. Here you will face a battle where you get to choose a squad and the battle is rated at recommended 80k combat power. Once you defeat the temple your hero will be awakened.

An awakened hero gets a new passive skill as well as the ability to choose a 2nd passive skill. You may change your awakened skill as frequently as you want without penelty. So try a few and see which one works for you.

To see what other players have chosen for their awakened skills you can go to Hero > Hero Book > Rank. Then find the hero click the little i on the bottom left and inspect their skills.

Side quests allow you to learn more about how to use your hero and their history while earning some helpful items.

As of Jun 11 2019 heroes in the side quest are fully upgraded with max equipment. They are not dependent on your actual heroes skill or level. So feel free to run these quests whenever they open up because it’s the same difficulty and reward no matter what level your heroes are.

Find the side quests at Inn > Request Center > Side Story.

See the guide on equipment to equip your heroes.

See the hero comparisons for some analysis of heroes.

See the squad builds of some other players to see what people are using.

See the squad builder to try playing around with building a squad.