El Chronicle
Hero Lily and her Side Quest Walkthrough

Lily is a great hero. At times and in certain battles she can put out more damage than any other hero. It’s depends on the situation. 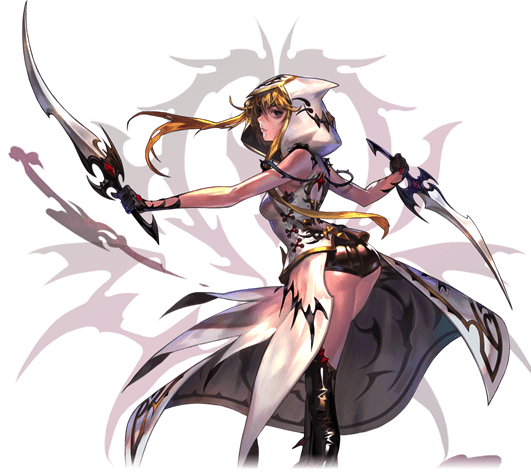 Critical Ambush is a 3 tap attack. Each tap of this skill will cause Lily to dash behind and stab them. With the right timing you can dash behind someone just as they swing towards you missing their attacks. Each of these attacks are AoE meaning they hit multiple targets that are in front of her.

Reaper's Contract is an invisibility skill. It completely removes aggro. But then it also causes basic attacks to do additional dmg while hiding. It’s an amazing escape trick.

Swift Strike is a two step attack. Step 1 is charge only, step 2 is high powered attack. This also causes extra damage if done while hiding. This is another super way to dodge out of incoming attacks, slip behind someone and attack from the rear. This attack is also AoE for enemies in front of her.

Enter combat invisible, open with Swift Strike, transition to Critical Ambush, then finish again with Swift Strike, and boom, you’ve just hit the target 10+ times in a short time. She has explosive attacks that cause serious damage that anyone should fear. She’s also very fast. She can outrun many enemies, and while invisible run even faster. But she bounces around the battle field like nobody else.

It seems hard to control Lily at first, but eventually you can get the hang of her. Use her to quickly take down any weak adds or smaller enemies like healers. She’ll decimate them quickly. Then assist the main tank take down the target, being careful to stay behind the target to not get hit.

Access her quest by going to the Inn > Request Center > Side Story and select Assassin of the Bloody Moon.

By completing this story you’ll learn how to effectively use Lily.

Lily’s 2nd skill is invisibility. Use it to run past everything lol. This mission is to sneak into the building.

The first room you get to is full of guards. These will all kill Lily in 1 hit. So you stealth, go invis and run past them. Run through that room and facing south, down the stairs.

Once past those guards, you’ll find some weaker guards. Kill them with your first skill dashing in and out.

Name: Stealth is What Makes Infiltrations

The trick to this one, kill the guard next to the cannon, the cannon becomes friendly and will fire at the boss for you. The boss will attempt to kill the cannon and that’s when you unload on the the boss.

You start with 3 guards coming at you, disappear, then use your first skill to dash back and forth killing them all together.

Soon as those guys die 2 guards come at you, followed by 2 more guards. These guys are slow, so one tactic is to run circles around them to bunch them up. If you can get all 4 together closely, wait for your cooldown to reset on your first attack, you can disappear, then dash around them attacking them with your AoE dash attack, killing all 4 at once.

These 4 guards drop 2 healing potions. Make sure to grab them when they die! I love potions!

Next there are 2 Boss guards. Just run past them and Devildog will spawn. When Devildog spawns the 2 boss guards run away.

Devildog is easy to kite. He gives plenty of warning to his attack so you can run away. Far away, so cooldowns can reset and you can think. Run away, wait for skills to reset, then jump in, attack, then run away.

When Devildog gets to 75% a cannon and guard will appear in the top right corner of the map. Kill the guard and then cannon becomes friendly. This will annoy Devildog and he’ll go attack cannon. This is your chance to really unleash on him while he bangs on the cannon.

Name: Who is the Thief

In this battle you get Scarlett on your side. She’s the little snow/frost wizard.

It's important to know what Scarlett's skills are: * When she jumps on a snowball and rolls it, it will freeze anyone she touches. Great time to jump in and attack whoever is frozen. * When she turns into a snowman, if you go near her you'll heal up. * When she casts a circle around you, you'll heal a little and get a buff. Now it's important to know how this `thief boss` attacks. He throws fire bombs at you, which hurt really bad, taking off 20% or more of your life. But, the trick to his fire bombs is just to run away. They only go so far and then they explode on the ground. And you can outrun them if you're quick. First kill the two brutes by grouping them and dashing around them with your first skill. Let Scarlett take the aggro and tank the thief boss. She's got tons of hp and heals herself so she's fine. The problem is though she doesn't hold aggro very well. So watch for things like her rolling snowball and when he's frozen jump that guy and stab him as hard as you can. As the thief's life goes down more enemies will spawn. Just stay out of combat, running around in big circles and going invisible. Then pick off anyone who's on the outside with a quick dash attack, then go back to running around.

In June 2019 side quests changed and the strategy now is to go as crazy as you can focusing on the thief boss. Attack him with everything you got, stay on him, tank him if you have to, ignore everyone else just go full thief.

Victory is accomplished once the thief boss dies.

Well. You face off here against a Big Ghoul. After about 20 seconds Thomas spawns. If Thomas dies you fail. Thomas will somehow generate a lot of aggro and the ghouls all will attack him. Thomas doesn’t do a shred of damage so he’s a real liability. Because of this you have sort of a timer before he dies and you fail the mission. So you better have your attack power up for this one.

After you kill about 5 mini-ghouls or possibly when the Big Ghoul gets to 60%, a big ogre will spawn at the top of the stairs. And if you kill that ogre, 2 more ogres will spawn. At some point some cannons spawn too which are aimed at you.

Tactic: just aggresively go after the big ghoul. Ignore everything else. Stealth, attack, attack attack attack, stealth and repeat. Sneaking in extra attacks wherever you can maybe even tanking for a bit.

Kill the big ghoul for victory. It’s not easy so prepare to try it a bunch of times.

Win this battle and complete her side quest.